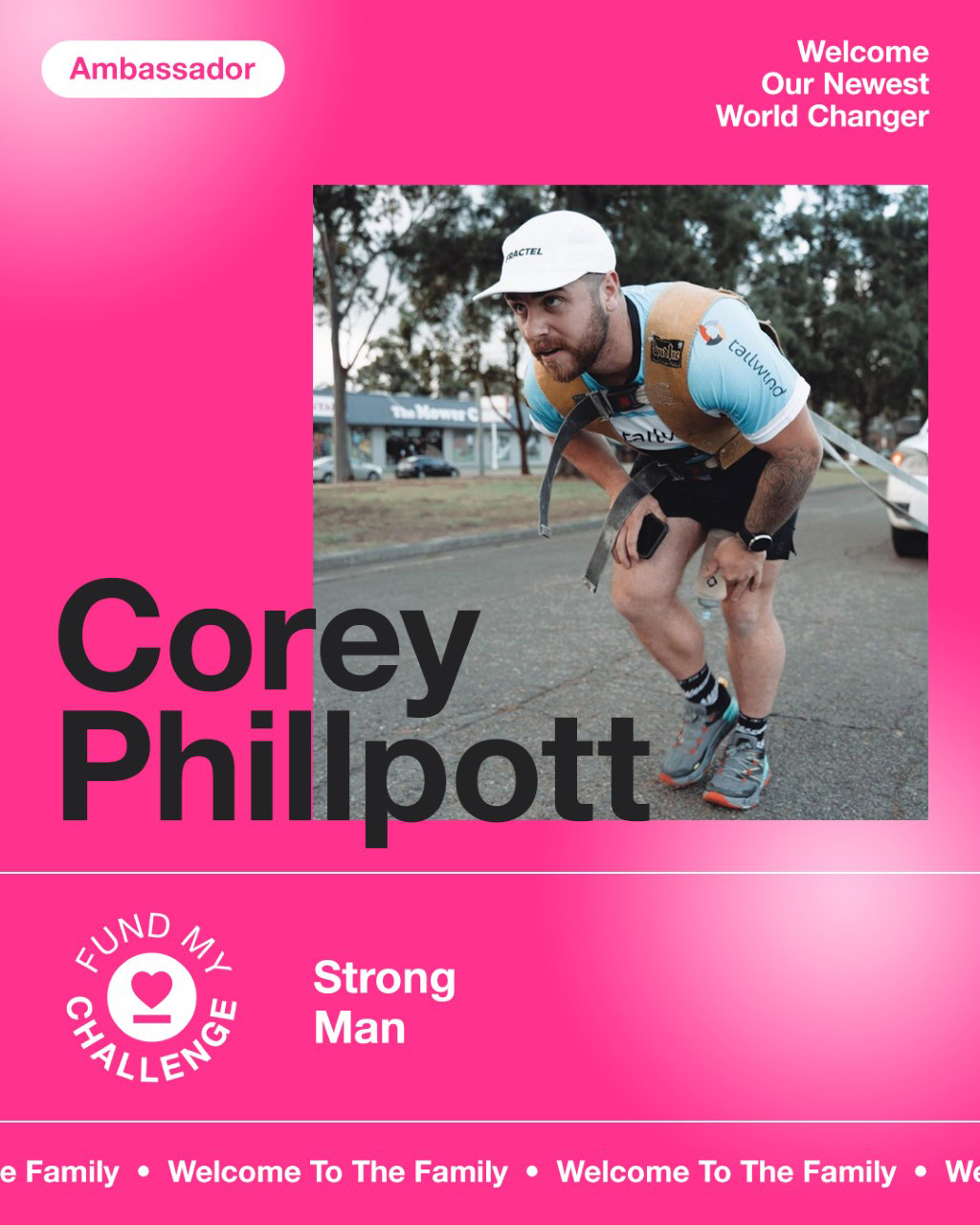 The 23-year-old from the Blue Mountains started running five years ago for weight loss, losing 40kg in the process.

Corey currently holds the world record for the World’s Strongest Marathon after pulling a massive 1.5 tonne (that’s 1500kg!) Ford Ranger for 42.2km in just over 16 hours. Corey’s effort was more than an hour faster than the two previous attempts,

Though this massive feat has not yet been ratified by the Guinness Book of Records, the message is no less powerful with Corey raising funds and awareness for Child Safe Australia, a harm prevention charity which works to prevent child abuse when in the care of an organization, through training, education, and the implementation of child safe protocols.

Corey donated $40,000 raised through his challenge to Child Safety, the money to be used developing a new safety awareness program for children in schools across Australia.

Raising money for child abuse awareness is something very close to Corey’s heart, with his family experiencing its effects firsthand.

“My wife is a survivor of child abuse,” Corey divulged.

Corey says he does these events because he loves heading into the unknown and pushing his body beyond thought limitations, defining the impossible.

“Doing these things scare me, but they also drive me to become better,” he said.

“I love seeing people’s faces when I tell them what I do, and I love continually inspiring people to become better human beings.

As a father of two working full-time, Corey’s life can be pretty hectic and full-on at times, making it tough to find time for the training required to complete his incredibly tough challenges into his daily schedule.

To prepare for the World’s Strongest Marathon, Corey trained for eight months, putting in late nights and early mornings while his family slept.

“Balancing these training days can get very difficult at times, but it’s all about scheduling and planning to make sure you are being the most efficient with your time,” Corey said.

A strong believer that if you want it bad enough, you will make time, Corey says he sacrifices a lot of sleep to train so he can dedicate the necessary family time to his family when they are awake.

“It’s a struggle now but will be all worth it in the end.”

Corey’s plans over the next three years include a number of physically and mentally taxing challenges, including attempting to become the World’s Strongest Ironman by completing an Ironman distance triathlon with a 100-pound (45km) tree strapped to his back.

“This is what I call ‘The Treeman’,” Corey said.

“No one has ever attempted this before so it will be the first of its kind!”

Having raised such an impressive amount of money on his own, now with the backing of Fund My Challenge, we can’t wait to see what Corey can achieve.

Watch this space in November this year for Corey’s incredible Treeman feat!