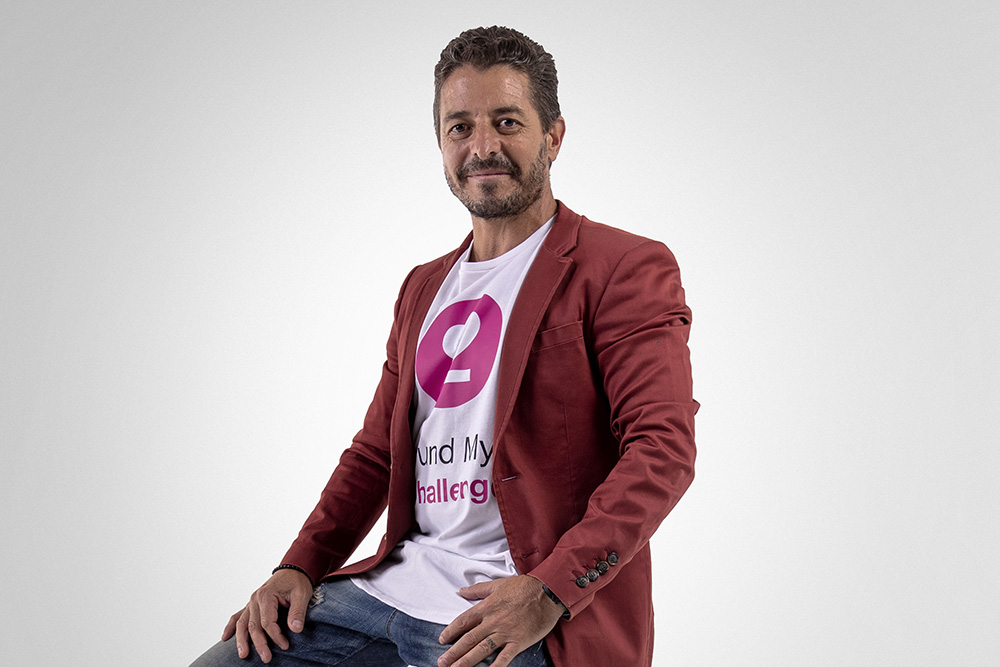 He’s the t shirt-wearing businessman with a broad smile and down-to-earth demeanour – Theodore Vairaktaris is one of the most passionate, ambitious and successful entrepreneurs in Australia.

Looking back, it seems unlikely that this two-time uni dropout was once determined to become an architect and abandon his father’s footsteps as a painter.

As founder and sole owner of Australia’s largest commercial painting company, Usher Group, and co-owner of a host of other business ventures, Theodore has certainly made his mark in the business world.

A textbook rags-to-riches story, Theodore’s purpose and passion not only got him through the toughest years of his life but allowed him and his business endeavours to flourish into successful and impactful operations.

Now Chief Executive Officer of Fund My Challenge, Theodore has set his sights upon changing the world, and with his community, he will.

In 2014, Theodore was awarded Gold Coast Entrepreneur of the Year.

In 2018, Theodore was awarded Australian EY Entrepreneur of the Year.

But, things haven’t always been so glamourous for the beating heart behind Fund My Challenge.

Growing up in housing commission homes, much of Theodore’s drive comes from a childhood spent growing up thinking of how he could get his family out of their situation and into a stable environment.

“I don’t believe I would have so much of an entrepreneurial spirit if I had it too easy,” he explains.

Theodore and his operations also wouldn’t be where they are today without the trying times of what he dubs “The Nightmare Zone”, the five-year period when the weight of his business almost crippled him.

“That was, without a doubt, one of the hardest stages of my career.

“It was essentially the hard-knock school of learning how to run a business. It was a period where I was taking the step from being a contractor with up to 20 staff to becoming a large company.

“I was doing everything myself – checking every contract and payment schedule, doing the invoices, dealing with all the clients, trying to build new revenue streams – and I just felt like I was getting nowhere.

“I found myself in a position where I was getting overworked, burning the candle at both ends and I just couldn’t see the light.

“Enduring that pressure undoubtedly solidified my passion and purpose and shaped who I am today.”

It didn’t take long for Theodore to realise he needed to allow himself to be led out of the small business mentality in order to lead and grow.

He reached out to many different mentors along his journey. Recently to Mr Peter Cox of Leadership Dynamics and asked him to become one of his mentors.

“When you grow people, you grow organisations,” Peter explains. “Theodore is one of those people who understand the importance of investing in his people and when you do that, you create a winning team culture.”

Within his profession, Peter works with businesses daily to develop stronger leaders and improve business performance.

“I can see the Fund My Challenge vision really has the potential to have a global impact. The reason why is the people involved.

“Everything will rise and fall with the people you surround yourself with. When you look at the ambassadors on the Fund My Challenge team, and Theo and the leaders around him, Fund My Challenge is really set up for success.

“Theodore is investing in these people to grow and empower them and unleash their potential to really drive the business forward.”

Within Usher Group, Theodore no longer has a specific role, allowing him to focus on the bigger picture.

“One of the most crucial things I did was accept I could no longer do it all on my own,” Theodore explains. “Talent is everywhere but I looked for passion, loyalty and hard work.”

Take Shane Spano, who started his career at Usher Group as an apprentice painter – today, he drives the company’s goals and ambitions as National Operations Manager.

Theodore is proud to remain the Managing Director of Usher Group, his 100-million-dollar business he built and led from the ground up.

The painting powerhouse has come a long way from its humble beginnings as 2001’s United House of Kolor (UHK), a one-man Gold Coast painting business (when we say one man, we mean a 20-something-year-old with just a few brushes and a big dream!).

Today, Usher Group employs more than 500 staff across six divisions, has an annual turnover in excess of $100 million, completes hundreds of projects a year and boasts a host of additional divisions including Signage, Property Maintenance, Coatings and Rendering.

Despite years of growth and change, painting is still at the heart of what the Usher Group does, having earned the impressive title of the largest commercial paint company in Australia.

The sky has been the only limit on Theodore’s entrepreneurial ambitions.

Together with Andrew Crimson, in 2006 Theodore established Washbox Global, a fully automated site washout and liquid waste management solution for construction sites that has saved over 10,000,000L of water on job sites to date.

Then there was the birth of Baxta, the company’s own paint brand created to meet the industry’s need for a superior coating system that reinforces that company’s commitment to innovation and staying ahead of the game.

Theodore is innovating every day, with up-and-coming businesses across multiple industries including the famous Man Hotel, Sunny Days Vodka and his Taris Property Group that has been producing outstanding developments across the country.

Alongside Usher Cup, the hybrid surf contest promoting grassroots surfing and raising over $60,000 for four beneficiary charities, the birth of Fund My Challenge represents Theodore’s biggest charity endeavour yet.

Building off of Usher Group’s charitable arm, Usher Love, a vehicle committed to having a positive influence and making a difference within the communities in which they operate for nearly 20 years, as well as the efforts of Usher Cup, Theodore has created Fund My Challenge to change the world.

Fund My Challenge shares the Usher Group’s defining Pillars, 12 values we hold close to our heart and infuse into everything that we do including Love, Creativity and Accountability.

Through the Global Awakening, our not-for-profit arm that built the Fund My Challenge platform as a vehicle to create for change, we have transformed the way charities raise funds and awareness.

Too often, viral challenges on social media raise a lot of awareness for charitable causes, but rarely garner the donations needed to make a meaningful difference.

Fund My Challenge makes these causes engaging and creates a bigger impact by driving donations directly to the charities.

“Fund My Challenge is a call to action,” Theodore says.

“Unfortunately, there’s a lot of dishonesty in the charity space, with mismanaging funds and whatnot. We want to instil confidence in our community that if you donate on our platform all funds received go directly towards the charitable purpose.”

Fund My Challenge also ensure valid causes are not lost in the crowd by leveraging our influencers and ambassadors to boost and amplify challenges, raising money for charities and those in need like never before.

“This is something we’ve never seen before,” Theodore says.

“No other platform utilises the good nature and huge amount of influence these amazing humans have for the right purpose.”

At Fund My Challenge, we believe in the goodness of humankind and that people do genuinely want to help those in need.

“I want to build a platform for my kids and all kids, to establish the next generation of world changers so they don’t have to go through the same struggles as we do.”

“They’re our future and they’re going to change the world.”

Theodore’s is innovating every day, ever a dreamer with one eye on his next move.

The future looks bright and possibilities are endless. Through Theodore’s drive and his team of world changers, Fund My Challenge is just the latest and greatest of his unprecedented ventures to create for change.

Download the Fund My Challenge app on the Apple App and Google Play stores and become a world changer today!