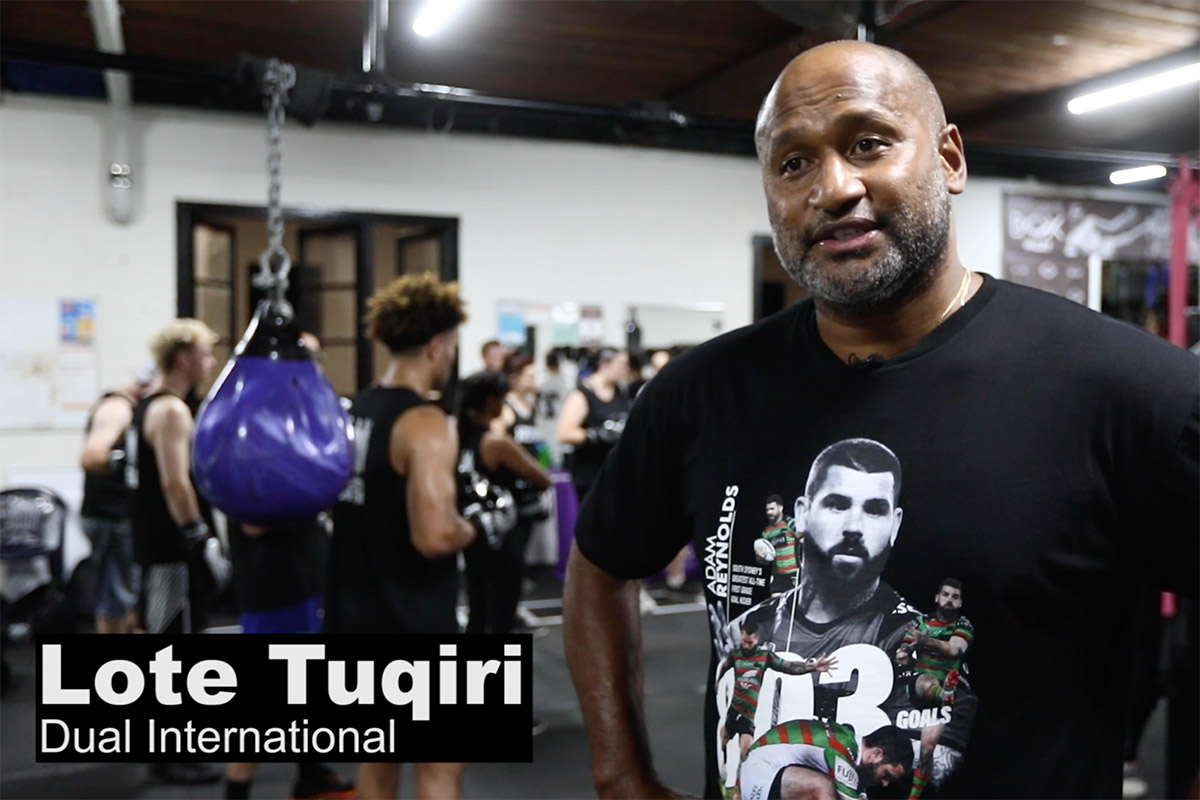 For over fifteen years, dual international Lote Tuqiri terrorised opponents and thrilled crowds around the world. Powerful, skilful and with speed to burn, Tuqiri represented the Brisbane Broncos, West Tigers and Souths Rabbitohs in the NRL, whilst also starring on the representative stage for Queensland, Fiji, and the Australian Kangaroos.

The centre, come winger then went on to become one of rugby leagues most successful Union converts, playing for the New South Wales Waratahs, Leicester Tigers, Leinster, and the Australian Wallabies before retiring in 2014.

You might expect that a visit to a suburban gym in Brisbane, on a school night would do little to excite an athlete of Lote’s credentials, but you would be wrong. The 76-test veteran was super impressed as he met with the squad assembling for Brisbane’s Corporate Fighter charity fight night.

“Amazing, amazing, I think they have got to be commended for what they are doing, I don’t know if at this stage in my life I’d be doing this, but you know it’s a big sacrifice and for them to come in here with Corporate Fighter and hopefully raise some money and awareness for their various charities through Fund My Challenge is amazing” Tuqiri said.

“After tonight, I think I’ll actually attend the fight night and see how they go, they have just started out, but I can’t wait to see how they go actually.”

Despite preparing and competing on the world stage for over a decade, Tuqiri said he takes his hat off to everyone prepared to step into the boxing ring, especially for charity.

“You have got nowhere to hide, for me I was in a team sport and you know if I was having a down day or an off day, I could probably not touch the ball, but when you get into that ring, you are on, the lights are on and let’s go, so it’s frightening, it’s scary, but I really appreciate what they are about to do, it’s an amazing effort.”

Under the expert tutelage of the Corporate Fighter team, this current squad will train six nights a week for the next 10 weeks, before stepping into the ring at the ultimate black-tie, charity fight night, Lote urging Australians to get behind the fighters and their charities.

“Come out and support these guys. I’ll be supporting them on the night, and I hope you can too. Jump on the Fund My Challenge website and click that link to support the fighters and their various charities.”

To support the Corporate Fighter Brisbane event and support some amazing charities, click on the link. https://corporatefighter.fundmychallenge.com/

To book a seat or table at any of our Corporate Fighter, black-tie events, visit https://corporatefighter.com.au/